Living in small communities such as Guernsey and Jersey is amazing for protecting us from some wider influences and threats, as the last couple of years have proved. However, that mindset can sometimes prevent us from seeing outside our island bubbles and looking at the bigger picture, as global trends and facts do have a bearing on our own existence.

The past two years have seen many changes in lifestyle and added re-evaluation of how we each want to spend our time on planet earth. As ever, any changes to the property market are fodder for the media’s love for a contentious story; whether it is about affordability, the wealth divide or the supply of homes - each sparks conversation among islanders.

The islands have historically sat as independent entities, so are to some extent insulated from the major ramifications from global events. But in recent times, our independence is being challenged with obvious knock-on effects such as Brexit. The level of isolation we have each enjoyed is slowly being compromised as the world becomes more unified with greater levels of data, reporting and evidence-based discussion. So, what are the facts about the UK property market as a whole and how do we stack up in the much broader picture?

In the UK, there has been an economic growth (GDP) of 4.8% in the second quarter of 2021 which underlines the strength of the UK’s post-lockdown recovery. The vaccination drive has been crucial to the bounce-back in consumer spending; it has also boosted employment and incomes. The UK economy is still around 4% smaller than it was pre-pandemic but the Bank of England expects households to spend their billions in lockdown savings, which were equivalent to 10% of GDP by April. It is predicted that the economy should recover to its pre-pandemic level by the end of 2021, which by all accounts is faster than originally expected. Growth should then return to levels more in-line with those of the pre-pandemic era in 2023 and 2024.

The biggest worry is that if interest rates were to increase more rapidly than expected, this would affect affordability and stall activity. However, the combination of economic bounce-back and the enhanced importance of ‘feeling comfortable and satisfied in your own home’ should help the UK market activity above that of the pre-pandemic era. Focus should now be on studying future interest rate changes to define how the next twelve months will pan out for all of us, which proves that this too could have a reflection on island life and bank lending, which echoes my previous comments about no longer being immune to global impact.

According to the Office of National Statistics, the UK House Price Index provides some interesting facts. Released on 15 September, the July data states:

In 2021, the Channel Islands have seen the following increases:

To delve a little deeper into the UK data, the graph below outlines house price increases by region: 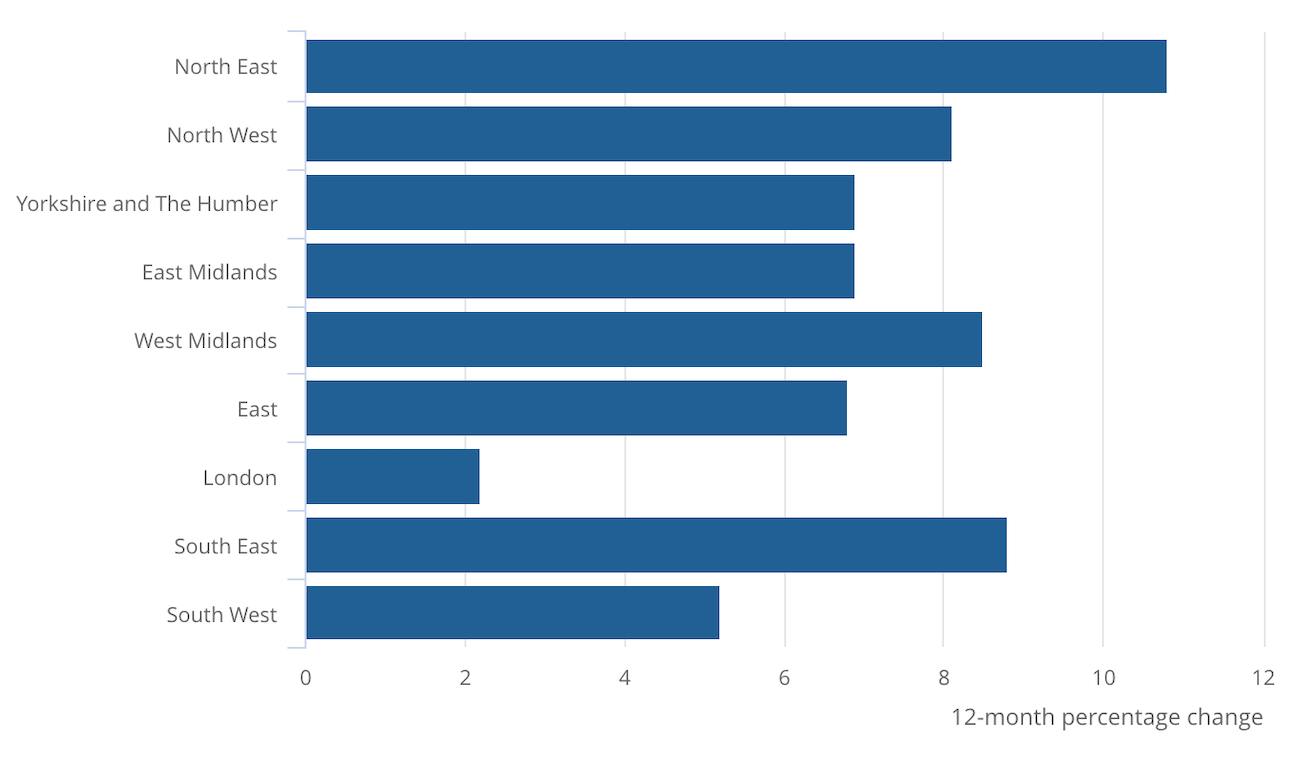 What this shows is a nationwide increase in-line with what has happened in our islands. An increase of more than 10% in the North East sees that named as the region with the biggest increase, but price increases across the twelve months is certainly a nationwide trend. This data shows that the islands are not alone in their increases, but rather reflect the UK and wider markets. In fact, Jersey’s 4% annual increase looks rather modest when examined against the national data.

Any sensible agent longs for a stable market, one that has balanced growth periods. The issue that we as agents have in the Channel Islands is supply and demand. You can value a property at £350,000 that ordinarily could achieve an offer of close to or at asking price to secure it and enter the conveyancing process, but the reality is the sheer volume of those looking to buy and a desire by vendors to maximise their investment. The biggest urban myth is that agents drive house price increases but this couldn’t be further from the truth, we are merely the messengers. The reality is that all decisions are made by the community itself and the vendors that occupy it. An agent is legally bound to submit any offer received to the vendor and it is their decision whether to accept an offer or request ‘best and final offers’, a process which has seen so many properties sold for in excess of asking price during 2021.

Without a crystal ball it is hard to predict where we will be in twelve months’ time but activity in the Channel Island market is showing no signs of slowing based upon supply and demand. Those sat back watching the market should be mindful of any future interest rate changes that could mean they miss their opportunity to sell - particularly when buyers are extensively borrowing to ‘up-size’ and meet their lifestyle demands of more accommodation, home offices and larger gardens to ensure life at home is as enjoyable as possible.

My 20+ years of experience in the industry have taught me that it’s always worth knowing what your property is worth. Don’t be afraid to give us a call and ask for a market appraisal from a professional agent (not your builder, plumber, hairdresser, car salesperson or ‘the chap down the pub’) then sit back and build data on your own personal circumstance.

Property price increases are a nationwide phenomenon, and many would do well to look outside our islands before assuming that we’re in exceptional circumstances here. At Livingroom we are always happy to help where we can, provide expert advice and offer an unbiased, award-winning service. 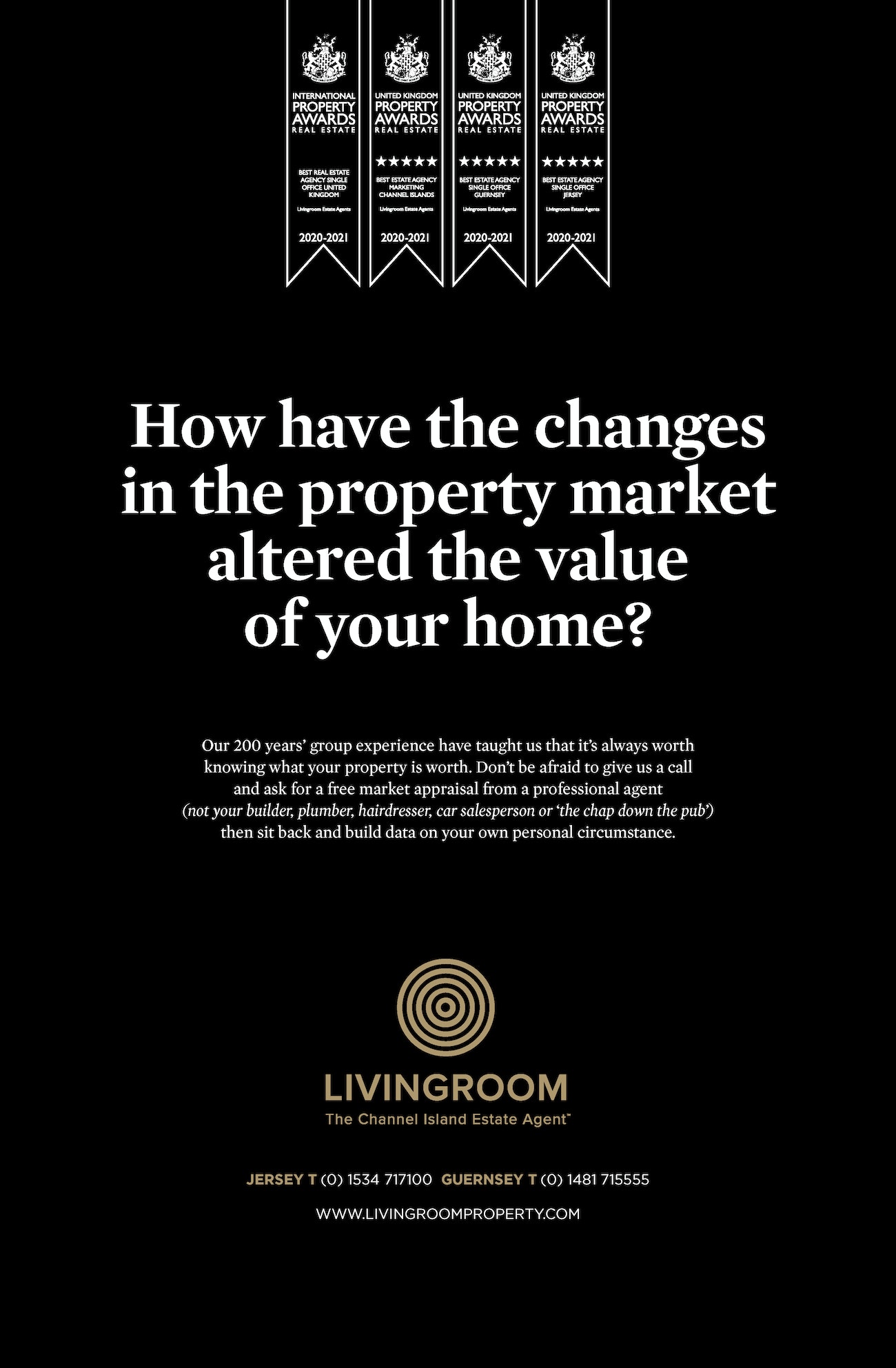 What is the Jersey property market going to do in 2022?